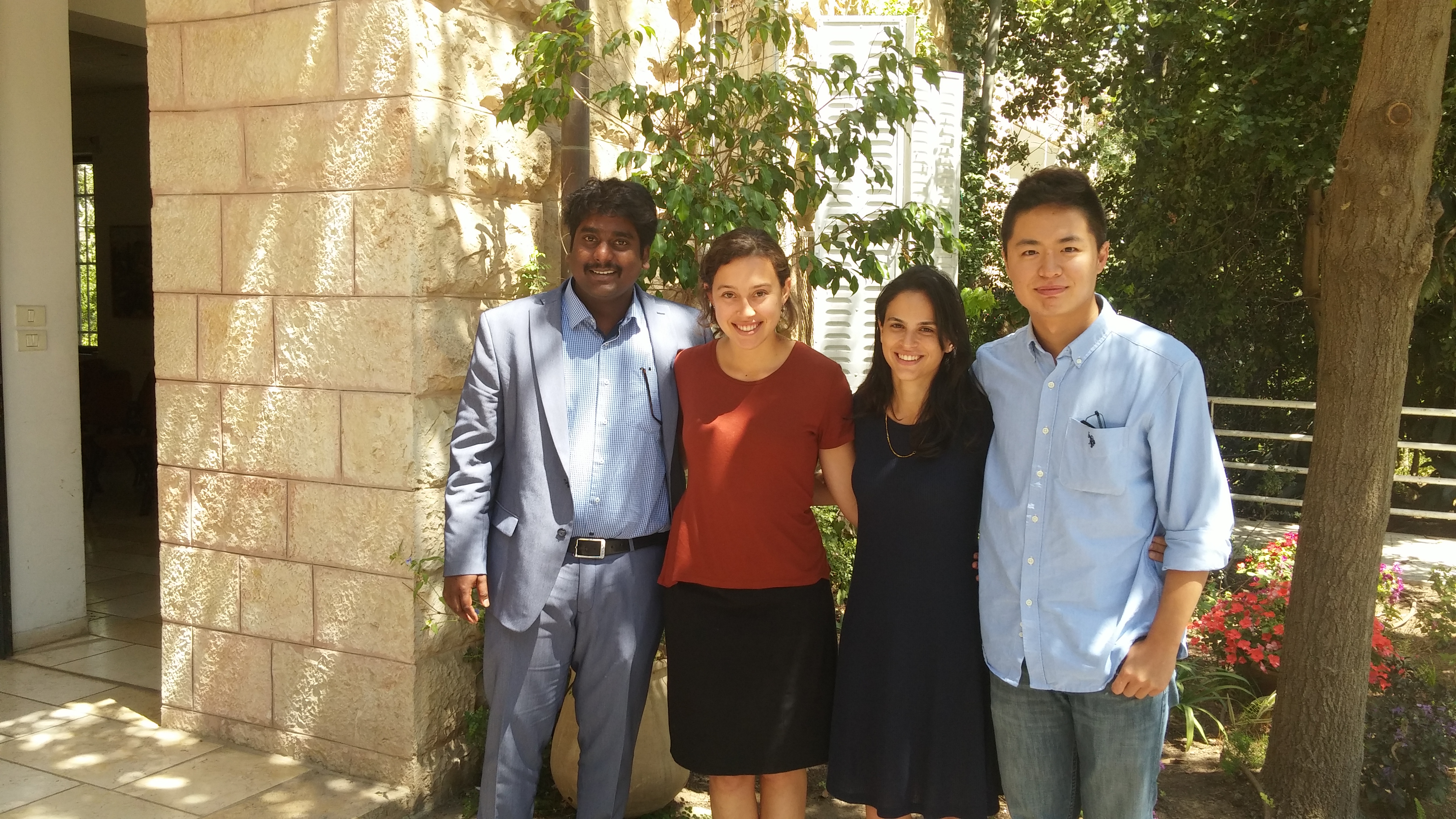 A few kilometers west of Arad, a small city in the southern part of Israel, is the Arab village of Darijat. On Sunday, July 3rd, 2016, a team of researchers and fellows from the Milken Innovation Center and the Jerusalem Center visited this Arab village. The goal was to learn how the village was transformed in a generation from cave dwellers to formal recognized village status with off-grid solar power, distributed water production, and other services.

It was already late in the afternoon when we drove around and into the village, heading towards Jaber Abu Hamad’s Cave. The rocky roads, rickety infrastructure, and lack of electricity communicated a feeling of despair. However, within half an hour, the gloominess was replaced with hope. This blog tells the story of Jaber Abu Hamad and the Arab village of Darijat, a story about struggle, survival and growth.

The Arab village of Darijat is a Fellah village (in Arabic, Fellah means an agricultural laborer, peasant or farmer). The name of the village, meaning “ascent of steps” originated from the stone stairs that were carved in the mountain by the Romans years ago to create a trade path. The Roman Road that descends to the village is a small segment of a road, which probably ran along the spine of the Hebron mountains, descended into the Negev, and continued from there through the Rift Valley into what is today Jordan. Though we do not know the precise date of the road’s construction, it was probably built by Hadrian’s troops after they had suppressed the Bar Kokhba Revolt in 135 CE. This was part of a new network of roads in the region, geared at reinforcing the presence of the dominant Roman army. You can read more about these Roman Roads and why the caves of Darijat are an important site to visit to understand cultural, historical, and current economic challenges in the Negev region at the Abraham’s Path website.

Jaber’s grandfather arrived to the region on which Darijat is located today in the year 1840, almost a hundred and eighty years ago. Until the 1960’s the family lived in caves according to the tradition. Prior to Jaber’s birth, for example, his father lived in the cave with his wife and seven girls, as well as with their cows and camels. We met Jaber in that cave, today a tourist attraction. Sitting in the ancient hospitality part of the cave, drinking Arab coffee and tea, we listened to Jaber telling the story of his life.

Jaber was born forty-nine years ago in Soroka Medical Center, Beer Sheba, Israel. The youngest out of twelve brothers and sisters, he is the only one to be born in a hospital (all others were born in the family cave). At the age of seventy-three, his father had seven girls, and no boys. According to Arab tradition, only boys can carry the family name and heritage when the head of the family passes away. Practically, this means that each family needs to have at least one boy to take care of the rest of the family when the father dies. Jaber’s father’s first wife decided to take this matter to her hands when her husband turned seventy-three. Unable to give birth she decided to look for a young lady to marry her elderly husband. But who would want to marry an elder? Smart and crafty, the first wife realized she had to trade. The wife decided to negotiate the marriage arrangements of her two youngest girls (who weren’t married at the time) with the second marriage of her own husband. The plan worked well: the girls married two brothers from another family in the village, and in exchange, the husband married one of their sisters. Two girls and three boys were born as a result of this arrangement. Jabber was the last one to be born. His elder father passed away not long after, when Jabber was only ten years old.

Grudgingly, Jabber became the head of the family at the age of ten. When he was only fifteen, his sisters urged him to get married. He agreed on one condition – he wanted to choose his wife. Jabber ended up getting married when he was in tenth grade, and had his first baby shortly thereafter. Initially he managed to study and work simultaneously, but it wasn’t sustainable. Ultimately he had to quit school to support his four boys and four girls. He worked hard as a cleaner, and gradually saved enough money to build his own house in the village.

The relationship between the state of Israel and the Arabs in the southern part of it (be them Fellahin or Bedouins) is complicated. Many of the settlements in the southern part of the country were not recognized by official authorities. Consequently, many Arab homes faced demolition for failing to comply with building and land use planning codes, and lacked access to basic government services such as water and electricity.  In 1987, eight new houses were built by community members and quickly destroyed by the Israeli government. One of the houses was owned by Jaber. He became desperate – financially and psychologically. Almost destitute, he had to work even harder to get to where he is today. He continued to work as a cleaner in the city of Arad and later on became a dessert chef in a luxurious hotel at the Dead Sea. He worked at the hotel for 19 years, and served as the head of the labor union for several years. At that point, he and the other village leaders took the situation into their own hands and pursued the path of achieving recognized status through the Ministry of Interior which they were finally awarded in 2004.

I was really touched by Jaber’s story.

First, it is a story about will power. Life weren’t easy for Jaber from the onset. He became orphan when he was still a kid; he became the head of the extended family at a very young age; he had to give up his education; at different points in time, he had to take jobs that not necessarily matched his skill set to take care of his wife and kids. Jaber chose to succeed. He worked hard, never gave up, and it paid off. He became a chef in a prestigious hotel at the Dead Sea. He has raised successful kids, many of them already holding academic degrees from Israeli and foreign higher education institutions, and others are pursuing an academic career at this very moment. He is a successful guide tour, and a very politically-involved figure in the village of Darijat.

Second, it is a story about political maneuvers, and the benefits they can bring to a local community. A small group of representatives from the village worked hard to advance state recognition of the village. The beginning of the struggle was a joint struggle of the Fellahin and the Bedouin. However, once they realized the struggle was doomed to fail, they separated themselves from the Bedouin struggle, and arranged an effective, legal and legitimate struggle through deploying political, public and communication means. For example, they did not affiliate the struggle with a single political party, and did require the government to follow its own laws and provide education to its children as required by the Compulsory Education Law. The key components that contributed to the government recognizing the village in 2004 were endless determination and a well-thought-out political strategy. The benefits that were gained by the community with the state recognition were high quality education, a clinic, an infant clinic, a post office, among others.

Finally, this story is proof that with a constructive attitude and an open mind, every community can be successful. It is quite remarkable that the Arab village is characterized by a very high-quality education system, no drugs nor smoking, a very low unemployment rate, educated women, and a very high high-school graduation rate. It is especially remarkable considering the neighboring Arab villages, and the southern part of Israel in general (both Jewish and Arab settlements alike). Why is it remarkable? the southern part of Israel is located far away from where most jobs are located, the infrastructure is often lacking, government investment is relatively low, and different minorities (often rivals) live one next to the other. In the village of Darijat, water, electricity and road infrastructure are lacking, and yet, the village produces teachers, lawyers, and doctors every year, living standards are high, and prosperity has benefited the community as a whole. I should say that this is an amazing case study of a community that has been able to transform itself. In the academic jargon, it is an amazing case study of a community driven development, a process in which the community members recognize their needs and act to overcome barriers and grow. The Darijat community recognized the importance of education as a driver of growth, and members of the community are investing a lot to ensure the young generation is well-educated. In addition, it is remarkable that the community was able to create a social model of engagement and mutual responsibility. I also think that the fact that caves and modern buildings co-exist in the village has a symbolic meaning. It symbolizes that development can and should happen, and any community should believe that it has the power to transform itself and build a social model that makes it proud.

I would like to use this opportunity to thank Jaber for sharing his story, and note that these stories give me hope for the future.