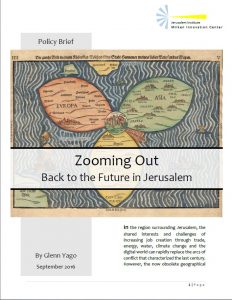 This policy brief examines the role of Jerusalem in the re-emerging region of the Eastern Mediterranean. The most recent geopolitical events and traumatic realignments in the region in Syria, Lebanon, and Iraq create the need for a Jerusalem that builds upon its historical, environmental, economic and technological history based upon a multicultural past. By focusing upon the city’s transformation based on shared geo-cultural and regional experiences, a new foundation could be laid down based upon out-of-the-box problem solving of issues resolving the virtual and physical Jerusalem.

Jerusalem has a special position in the inter-metropolitan Eastern Mediterranean region that is emerging now, as it did in the ancient past.  It is the only large city and urban region situated between the Mediterranean coastal strip and desert hinterland.  These non-oil producing areas have in the past suffered from energy and natural resource scarcity, but are now well-positioned to leverage accelerated growth during a period of climate change and knowledge-based technological exports that decouple growth from natural resource use.

The high concentration of people, money, services, trade and production will create a strong backbone by 2050 of nearly 200 million residents. The metropolitan region of Jerusalem and its surroundings (including the Israeli Municipality of Jerusalem and the Palestinian Jerusalem Governorate extending also to Ramallah, Jericho and Bethlehem) is the center of this emerging regional alliance of cities that will spread from Cairo to Tel-Aviv to Jerusalem to Amman to Istanbul.

By skipping the present paralysis and working backwards from this not too distant future, we can see how an alternative future can emerge. In the region surrounding Jerusalem, the shared interests and challenges of increasing job creation through trade, energy, water, climate change and the digital world can rapidly replace the arcs of conflict that characterized the last century.