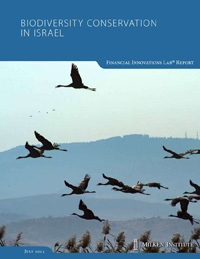 Located at the nexus of three continents, Israel is home to a diversity of complex ecosystems. But as population density has increased over the past decade, there has been a spike in commercial and residential development in areas that once supported a wealth of animal and plant life, creating an urgent need for conservation. Efforts to date — based on regulatory policies and designating land as national parks — have proven ineffective, pointing to the need for new solutions.

The Milken Institute and Israel’s Ministry of Environmental Protection brought together a diverse group of scientists, capital market experts, governmental officials, foundation executives, architects, and land developers for a Financial Innovations Lab® to evaluate potential incentive programs and other financial mechanisms that could be used to appropriately value Israel’s biodiversity. The market-based approaches identified during the course of Lab discussions, though developed with Israel in mind, can also be applied to other regions where biodiversity is under threat — in any nation with a functioning market economy.