Financial Innovations for Economic Recovery and Development in Northern Israel 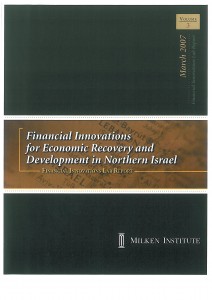 In September 2006, a month after the United Nations brokered a ceasefire in the Second War in Lebanon, the Milken Institute held two Financial Innovation Labs to address recovery and development in northern Israel. From July 12, when the war began, until the August ceasefire, more than 4,228 Hezbollah-launched missiles landed inside Israel against civilian targets. The objective, as stated by Hezbollah’s secretary general at the time, was to bring the economy of northern Israel – home to Jews, Arabs and Druze, and roughly 40 percent of the nation’s population – to a halt.

Businesses in northern Israel lost approximately $1.4 billion in revenues. Rocket attacks leveled nearly 6,000 homes throughout Haifa, Nazareth and Tiberias. Dozens of kibbutzim, moshavim, and Druze and Arab villages were made temporarily uninhabitable. Fires destroyed up to 9,000 acres of forest. While unable to curb Israel’s robust macroeconomic growth, the attacks did accomplish the Hezbollah objective of further weakening the regional economy in the north, which had entered the war with a weak labor and housing market, and was lagging behind the national average in other areas of commercial and industrial activity. The region is characterized by relatively high unemployment, high poverty rates, low average income and five years of negative out-migration.

During meetings with colleagues at the Koret Israel Economic Development Funds and The Portland Trust, as well as with Knesset members and Israeli cabinet officials, the Milken Institute undertook plans for two Financial Innovation Labs (one in California, the other in New York) to define strategies for breaking the logjam of project funding for northern Israel development and to facilitate postwar recovery in the region.

Over the course of the Labs, participants concluded that of the alternative financing ideas put forward, three were the most feasible and pressing:

Lab participants also recommended using the Chicago Climate Exchange (CCX) Offset Program as an innovative means of financing. By replanting trees in the decimated forest area of northern Israel and participating in CCX, the region stands to gain an estimated $3.5 million over twenty years.

In late October in Acre, the results of the Labs were presented to representatives of the Confrontation Line Forum (Forum Kav Ha-Imut), an organization of administrators, mayors, and representatives of kibbutz industries, businesses, and various other public, private, and nonprofit enterprises active in northern Israel. Vice Prime Minister Shimon Peres, who serves as minister for the development of the Negev and Galilee, addressed this conference about economic development in northern Israel.

In January 2007, additional meetings were held at the Ministry of Finance and the Ministry of Industry, Trade and Labor, and at the Public-Private Partnership office of the Finance Ministry (hosted by Inbal, the government-owned insurance corporation). These sessions were scheduled to advance the identification and approval of projects, and the facilitation of inter-ministerial assistance.